Email ThisBlogThis!Share to TwitterShare to FacebookShare to Pinterest
Author: Molly

According to popular belief, the word "Xmas" was introduced as a secularized version of the word Christmas. This is wrong. The "X" part of the word comes from the Greek letter "chi" (Χχ), which in turn is the first letter of the Greek word “Χριστός” which translates into Christ. The “mas” part of the word derives from the Late Latin word: “missa”.
Posted by Unknown kl. 05:00 No comments:

Email ThisBlogThis!Share to TwitterShare to FacebookShare to Pinterest
Author: Hugo

Born October 27,1932 in Boston, Massachusetts, Sylvia Plath was a poet, novelist and short story-writer. Although very creative, she was also a very troubled woman and suffered from depression throughout most of her life. In school she was the ideal student with prefect grades and she won numerous awards for her writing, but all the time fighting her inner demons. While studying at Smith College in 1953 she made her first suicide attempt, but failed and was taken in for psychiatric care for six months. In 1956 she met and married the poet Ted Hughes. After a complicated marriage, the couple divorced in 1962 after having two children together. On the 11th of February, 1963, Plath sealed the door between the kitchen and her children’s bedroom with wet towels whereupon she put her head in the oven and turned on the gas. She was already dead when found.
Sylvia Plath’s poetry is very vibrant, full of disturbing images written on playful meter. They create an image of her own troubled mind. Most of her poems are deeply personal, and talking about ordinary, mundane things that turn terrifying and overwhelming to the author. She is seen as one of the most influent poetess of the 20th century, and has become a symbol and an icon through her tragic suicide, not unlike the movie-worlds Marilyn Monroe who was made immortal through her death.

You do not do, you do not do
Any more, black shoe
In which I have lived like a foot
For thirty years, poor and white,
Barely daring to breathe or Achoo.

Daddy, I have had to kill you.
You died before I had time--
Marble-heavy, a bag full of God,
Ghastly statue with one gray toe
Big as a Frisco seal

And a head in the freakish Atlantic
Where it pours bean green over blue
In the waters off beautiful Nauset.
I used to pray to recover you.
Ach, du.

In the German tongue, in the Polish town
Scraped flat by the roller
Of wars, wars, wars.
But the name of the town is common.
My Polack friend

Says there are a dozen or two.
So I never could tell where you
Put your foot, your root,
I never could talk to you.
The tongue stuck in my jaw.

It stuck in a barb wire snare.
Ich, ich, ich, ich,
I could hardly speak.
I thought every German was you.
And the language obscene

An engine, an engine
Chuffing me off like a Jew.
A Jew to Dachau, Auschwitz, Belsen.
I began to talk like a Jew.
I think I may well be a Jew.

The snows of the Tyrol, the clear beer of Vienna
Are not very pure or true.
With my gipsy ancestress and my weird luck
And my Taroc pack and my Taroc pack
I may be a bit of a Jew.

I have always been scared of you,
With your Luftwaffe, your gobbledygoo.
And your neat mustache
And your Aryan eye, bright blue.
Panzer-man, panzer-man, O You--

Not God but a swastika
So black no sky could squeak through.
Every woman adores a Fascist,
The boot in the face, the brute
Brute heart of a brute like you.

You stand at the blackboard, daddy,
In the picture I have of you,
A cleft in your chin instead of your foot
But no less a devil for that, no not
Any less the black man who

Bit my pretty red heart in two.
I was ten when they buried you.
At twenty I tried to die
And get back, back, back to you.
I thought even the bones would do.

But they pulled me out of the sack,
And they stuck me together with glue.
And then I knew what to do.
I made a model of you,
A man in black with a Meinkampf look

And a love of the rack and the screw.
And I said I do, I do.
So daddy, I'm finally through.
The black telephone's off at the root,
The voices just can't worm through.

If I've killed one man, I've killed two--
The vampire who said he was you
And drank my blood for a year,
Seven years, if you want to know.
Daddy, you can lie back now.

There's a stake in your fat black heart
And the villagers never liked you.
They are dancing and stamping on you.
They always knew it was you.
Daddy, daddy, you bastard, I'm through.

“Daddy” was written on October 12 1962, shortly before her death. It’s talking about the complicated relationship Plath had with her German father who died when she was eleven and was published posthumously in the collection “Ariel”.
Mad Girl’s Love Song
"I shut my eyes and all the world drops dead;
I lift my lids and all is born again.
(I think I made you up inside my head.)

The stars go waltzing out in blue and red,
And arbitrary blackness gallops in:
I shut my eyes and all the world drops dead.

I dreamed that you bewitched me into bed
And sung me moon-struck, kissed me quite insane.
(I think I made you up inside my head.)

God topples from the sky, hell's fires fade:
Exit seraphim and Satan's men:
I shut my eyes and all the world drops dead.

I fancied you'd return the way you said,
But I grow old and I forget your name.
(I think I made you up inside my head.)

I should have loved a thunderbird instead;
At least when spring comes they roar back again.
I shut my eyes and all the world drops dead.
(I think I made you up inside my head
Posted by Unknown kl. 04:58 No comments:

Email ThisBlogThis!Share to TwitterShare to FacebookShare to Pinterest
Author: Lovisa

Email ThisBlogThis!Share to TwitterShare to FacebookShare to Pinterest
Author: Edvin 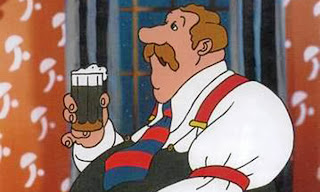 Email ThisBlogThis!Share to TwitterShare to FacebookShare to Pinterest
Author: Vilhelm

SOME INTERESTING FACTS ABOUT CHRISTMAS


Norwegian scientists have hypothesized that Rudolph’s red nose is probably the result of a parasitic infection of his respiratory system.

According to data analyzed from Facebook posts, two weeks before Christmas is one of the two most popular times for couples to break up. However, Christmas Day is the least favorite day for breakups.

In Poland, spiders or spider webs are common Christmas trees decorations because according to legend, a spider wove a blanket for Baby Jesus. In fact, Polish people consider spiders to be symbols of goodness and prosperity at Christmas.

Christmas purchases account for 1/6 of all retail sales in the U.S.

The French gave the biggest Christmas present ever in 1886. It was the Statue of Liberty, and they gave it to the United States of America.

That "Xmas" stems from Greece. The Greek "X" is a symbol for Christ.

During the auspicious Christmas time many of the pet owners think their pet as human beings. It is noticed that almost 56 percent of Americans sing to their pets.

Scraps of Christmas can make problems for you many times. The Christmas scraps are responsible for 400,000 cases of disease and sickness after the Christmas time.

Father Christmas has two addresses, Edinburg and the North Pole. If someone writes a letter and wants to send it to "Toyland" or "Snow land", then that particular letter goes to Edinburg. But, if someone sends the letter to "The North Pole", then it has to go to the North Pole because there is a place called North Pole.

Email ThisBlogThis!Share to TwitterShare to FacebookShare to Pinterest
Author: Joel

My personal advice for gifts for the Christmas of 2013

#10. A gift token. The perfect gift if you have no idea what to buy.
#9. An older model of the Iphone, they all look the same, no one will notice.
#8. A playstation 3. For the all the ignorant people who prefers this junk over xbox.
#7. The xbox. For all the people who chooses the correct console.
#6. An Ipod. If you can’t afford an Iphone or an Ipad. This will do just fine.
#5. A TV. So they can play on their new console.
#4. The newest model of the Iphone. Everyone loves that.
#3. A new computer. If your receiver is a gamer, they will worship you for this.
#2. A car. Who doesn’t want a car?
#1. Something handmade who comes directly from your heart. This gift fills everyone with love and joy.
Posted by Unknown kl. 04:50 No comments: